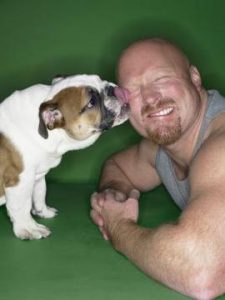 From birth, puppies are licked by their Mom to waken them, groom
them and encourage their new life beginnings! Without question, her licking
begins the bonding process and establishes their life-line for future food and
comfort! (As the puppy matures, they learn that food will come out of Moms
mouth if they lick her first). Littermates lick each other which is also part of the family bonding that occurs within a normal dog pack.

Subsequently, I am convinced that a dog licking your face is simply her expression of affection and acceptance of you, her Pack Leader.  She
may be cleaning you (just like her Mom did to her) or just likes the taste of
your skin (o.k. dogs aren’t that picky, even if you just finished working
out!).  P.S. she may also be using her sense of smell to see how you’re feeling.

Remember, too, that dogs are descendants of wolves and in the wild licking each other’s faces was a means of communicating respect and hierarchy among the pack.  She may also be indicating she’s hungry, especially if the licking is done around normal meal times.

Dogs love to groom themselves, so if they decide to groom you too, it’s a good thing! Licking (i.e. grooming) also releases endorphins in dogs.

If you happen to own a compulsive licker, it’s OK to use commands such as “no lick!” or “that’s enough!” when she gets carried away.

If, however, your dog is licking herself too much, causing sores or skin
ulcers, you should consult your Vet, as this might indicate a condition that
requires professional treatment.

Fundamentally, consider your dog’s licking akin to kissing you.  And that’s AMORE!