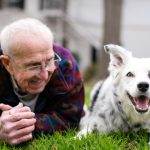 Dogs are more than Pets…they’re Geniuses!

The old adage “you can’t teach an old dog new tricks” was dismissed a long time ago, as we know that any dog, at any age, is not only capable of learning new tricks, yet recent studies suggest that dogs have cognitive abilities and are actually capable of abstract thought and inference.

The most notable example of a dog’s cognitive ability is the now-famous Chaser, a Border Collie, who was taught over 1000 nouns by his owner, Dr. John Pilley; Professor Emeritus at Wofford College; a dog owner deeply committed to his dog’s care, mental well-being and a strong desire to fulfill her natural breed instincts…and his talent and patience to test it.

When Dr. Pilley retired, and simultaneously acquired Chaser as a pup, an article was published about Rico, a Border Collie in Germany, who had learned over 200 words.

Now known as the “Rico study”, the implication of Rico’s cognitive abilities suggested that dogs were able to make inferences in learning similarly to that of (human) children.

That dogs could comprehend grammatical elements in sentence sequence became Dr. Pilley’s focus for the next 3 years, working with Chaser 5 hours a day.

He introduced individual toys, with specific names for each, and would command Chaser to find it. By repeatedly searching and locating each object, Chaser learned each toy’s name by rote.  Of course, this took rigorous training, with daily rehearsals and hours of repetition.

Dr. John W. Pilley has published the book: “Chaser: Unlocking the Genius of the Dog Who Knows a Thousand Words” and both can be viewed on YouTube, along with national acclaim, recognition and the website: www.chaserthebordercollie.com.

Pilley’s work has inspired other animal intelligence experts including Brian Hare, an evolutionary anthropologist at Duke University and author of The Genius of Dogs.

According to Brian Hare: “There are lots of animals that have been trained to understand hundreds of words … but what’s interesting is how she (Chaser) learned them and the fact that she learned them through inferential reasoning.”  Hare founded DOGNITION and has successfully tested his own dog, Oreo, in the field of inference and cognitive recognition.

It’s important to recognize that Border Collies like Chaser are exceptionally smart dogs.

You may not have a “star performer” like Chaser, yet do not underestimate your dog’s ability to understand what you are commanding!

It’s never too late to teach your dog a new trick or two; or a few nouns, adjectives and pronouns in your unique communication with your furry companion.

Quality pet care, and your interpersonal relations with your 4-footed loved ones, has limitless possibilities.