How Dogs Communicate -a Love Language between us 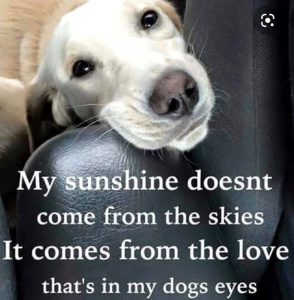 If you own a dog, you know they possess marvelous communication skills. Apart from their vocalization and understanding of our words and commands, dog body language involves their posture, tails, head and eye gaze and using their paws to emphasize their point.

Have you noticed when you stop petting your dog how they “paw” you for more? I love the lovers who can’t get enough petting and stroking; especially when at the computer keyboard with a cup of coffee in one hand and their head gets involved to help say “keep going”.  The coffee flies.

Roll over is more than a trick

Rolling over for a belly rub is both a sign of relaxed contentment and to garner love and attention. It’s also a sign of trust in you. Done in the presence of other dogs, it may be a sign of respect to the higher-ranking dog in the pack.

The tail is a good tell

A low to medium tail position that is either still or wagging is a dog’s “tell” that he is relaxed and happy. If it’s tucked under, this dog is expressing fear, deference or appeasement. When the tail goes high and fast, this could be excitement, tension, or aggression. The latter requires big-picture context in order to decipher what’s being communicated. I enjoy the helicopter tail that is accompanied by a wiggling body, soft eyes and excited whimpers that truly says, “I love you!”

Studies have shown that dogs are really good at reading our moods, via eye gazing. Dogs follow our gaze to determine if what we’re saying or doing is directed at them. Additionally, when we gaze back, our levels of oxytocin (the “cuddle chemical”) are increased in both dog and owner. It might be that those “puppy dog” looks were developed by dogs to get just what they want from us.

For those dogs that look away, they are simply being polite and deferential. They do not wish to be confrontational so avoid your eye gaze.

Equally as fascinating as a dog’s body language cues, is their ability to communicate verbally. Not only are dogs using a range of vocal signals (whining, barking, baying (hello Beagle), but in some cases, their own unique sounds (one I’ve heard yet can’t fully describe, sounds like “row, row, row”).

Not only can they communicate verbally with other dogs, knowing instinctively how to interpret the other dogs’ bark, they understand our words. Their cognitive abilities go well beyond their learned response to training commands.

Dogs have proven their ability to understand what we are barking about. Every dog knows what the word walk means. Ex: when we ask them “wanna go for a walk?” while also grabbing visual aids such as a leash, tennis shoes and even poo bags, these verbal and non-verbal signals from us sends them into excited oblivion.

In the book “The Genius of Dogs”, by Brian Hare & Vanessa Woods, Brian talks about his own dog Oreo. Brian’s Dad decided it would be a great idea to get Oreo to fetch the Sunday paper from their long, steep driveway. His father simply brought Oreo to the end of the driveway, pointed at the paper and said, “fetch paper”. When Oreo complied, he was praised. Within a week, Dad was standing at the top of the driveway, asking Oreo to “fetch paper” and Oreo knew what was wanted.

Not only did Oreo understand the words, but also the initial gesture of pointing at the paper and applying cognitive inference as well. Dr. Hare’s early examination of Oreo’s cognitive abilities has launched a full-scale institute of Canine Cognition Studies known as DOGNITION. Learn more @ https://www.dognition.com/ for more detail and enlightenment.

To quote Dr. Hare: “Relative to other animals, it is the ability of dogs to understand human communication that is truly remarkable. Some dogs have the ability to learn hundreds of names for objects. They learn these names extremely rapidly through an inferential process of exclusion. They also spontaneously understand the category to which different objects belong. Some dogs even show understanding of the symbolic nature of human object labels. Dogs may truly understand words.”

I am not an expert nor possess any degrees in anthropological studies. I have simply had the pleasure of hosting and personally observing 1000’s of dogs in my home over the past 13 years in my cage-free boarding business. Yes, it is truly possible to “talk to the animals” just like Dr. Dolittle’s character. Dogs understand what we are saying and doing and lovingly reciprocate in their own unique and wonderful ways.