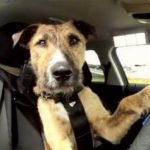 By now, you have probably seen, or heard of, Porter: the world’s first driving dog! Now with over 13 million views on YouTube, we here at Doolittle’s Doghouse wish to share with you abundant cuteness and talent! While many have viewed this unbelievable array of cleverness, the SPCA, Society for the Prevention of Cruelty to Animals, have stated that the three dogs they taught to drive cars were victims of abuse or abandonment.

And in their attempt to make these furry friends appeal to more people, the SPCA has taught these dogs some umm… fancy(?) tricks! As the video is about three years old now, there is little doubt that these furry friends have now been adopted. Still, they raise an awareness regarding the overwhelming need to adopt rescue animals, all of whom deserve forever, loving homes.

According to the ASPCA, approximately 7.6 million companion animals enter animal shelters nationwide. Of those, approximately 3.9 million are dogs; 3.4 million cats. The adoption rate of dogs is approximately 35%, with 31% sent to the euthanasia chambers. We would like you to focus on these special furry pals featured in one of the most admirable videos on the planet.

Porter and his buddies were “paroled” from the shelter and clearly demonstrate the unique talents that all dogs have.

A quick note…perhaps these special dogs can apply for a job with Uber in their self-driving car project in Pittsburgh? Enjoy the show!